After I returned from Chimborazo, I received a message from a colleague of mine at WFP that sounded something like this:

“Hi Edita, hope you are ok. If you are all fine and unaffected and we start an operation [response to the earthquake], are you interested?”

Of course, I was more than happy to help. Ecuador was no longer a foreign country to me; it was more like a home after I climbed a dozen of its volcanoes. I was in the same situation as last year in Nepal, when I joined WFP in its response operation to the earthquake.

The next six weeks I would spend travelling between Quito and the coast, working with the response team. It was difficult to see the destruction and suffering of people on the coast. But I was glad I could stay on and make my contribution to the country I had come to love so much for its beautiful nature and people. 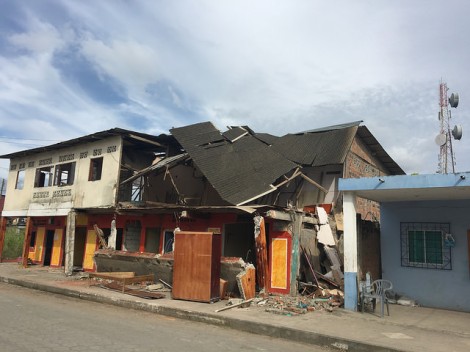 I had no days off, and had no control of my schedule. Whenever I was in Quito, I tried to keep fit as much as I could by getting up early in the morning and going for a run around the park. It wasn’t easy to run at the beginning, as Quito is 2,800m in altitude.

I was coming back from a week-long mission on the coast one Friday and could foresee this could be an opportunity for me to sneak out to the mountains for a couple of days. Fortunately, Benno was also free that weekend. I sent a text to my supervisor saying I will be off for a couple of days for a much needed recovery. To my delight, I got a positive response.

After a week on the coast, I was definitely out of shape and lost all my acclimatization. So, I had a day to re-acclimatize before I headed back to Illiniza Sur (5,280m) for another try. We picked Rucu Pichincha (4,696m), climbing the Eastern ridge, via the Paso de la Muerte, for my acclimatization. This route is a V in rock climbing on the hardest part. It was a fantastic choice – some rock climbing, scrambling – and a quick way to get back in shape. 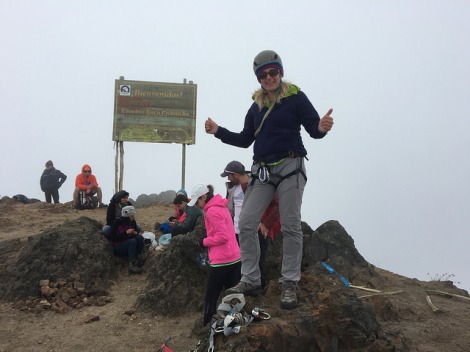 Edita on the summit of Racu Pichincha

The same evening we drove to the Reserva Ecologica Los Illinizas. I couldn’t believe, one month later, I was coming back for another shot at Illiniza Sur summit! The weather was awful, but the snow conditions were much better. It was almost too dry on the mountain, making us exposed to rock fall. The climb was relentlessly steep and technical. I thought there was no way I would make it to the summit. I wasn’t well acclimatized nor in a good physical shape.

We climbed alpine style, front-pointing our crampons up the steep ice wall and snow ramps (45 – 75 degrees), for most of the climb. I regretted I didn’t bring the Cobras – technical ice axes, designed for ascending vertical ice sections much more easily. My calves burned and my lungs burst from the effort and altitude. 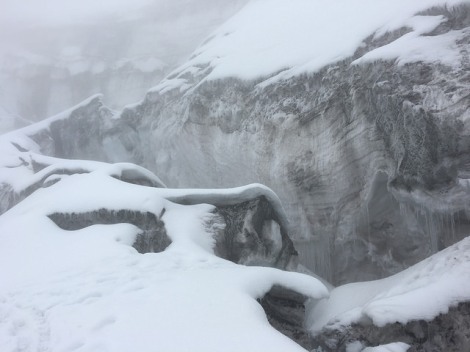 I couldn’t believe I made it to the summit. It was terribly cold and windy there. Clouds hid all views. We didn’t linger longer than five minutes before we started heading down. Climbing down was easier and more fun as I was getting used to the style. The weather was also clearing a little. Illiniza Sur is a ‘finished business’ but I would like to return for the views I missed both times!

One selfie I manage to take on the summit of Illinia Sur – too cold and windy!

If you wander what will my next adventure be, I can’t tell you that yet… but no matter how big or small, it will be another good one…  Stay tuned!