First of all, I would like to thank everyone for your thoughts and support while I remained stranded at  Everest Base Camp after the earthquake and avalanche. It was a dreadful week, and I am so relieved to be back to safety. I am really grateful to Mark Horrell for all his support, and for keeping my blog going. We were cut off from communications, but somehow he managed to get my SMS and keep you informed.

I am still emerging from shock after the recent events, but I wanted to post an account of what happened at base camp before the memory of those terrible hours fades.

The expedition was going so well; the whole Altitude Junkies team did well on the acclimatization rotations. We were feeling so positive about the icefall and the whole climb of Lhotse and Everest. Margaret and I completed our rotation into the icefall on Friday, the day before the earthquake. We were happy to be climbing, we felt great, and were both in good shape.

On Saturday, April 25th, we were taking it easy. All the Junkies were in camp, even though we usually went for walks to Gorak Shep or Pumori ABC. That morning I wrote a blog post about the acclimatization rotation and sent it to Mark to post. Little did I know he would never get round to posting it, or that by the time he received it he didn’t know whether I was dead or alive.

I was running out of battery on my phone, and went to find our leader Phil Crampton to ask him if I could charge it. I found him in the dining tent chatting with the Himex team’s doctor Ann, and they invited me to join them for tea. As we talked the table started to rattle and move, faster and faster. We realized it was an earthquake, and on it went for 90 seconds, though it seem so much longer. As soon as the shaking stopped  we ran outside to see if everyone was OK. Then to my horror I looked up the hill and saw a huge snow cloud falling towards base camp. Phil cried out to get back in the dining tent and go down. It was only a matter of seconds before we were all on the ground and felt the impact.

The tent saved us. The other Junkies were hiding in their sleeping tents. Margaret was hiding behind hers, as she didn’t have time to run anywhere. Barbara was running for safety and fell on her face. She split her lip and broke some teeth, but managed to escape.

The avalanche stopped, and once again we went outside to see if everyone was OK. We were all shaken, but by a miracle Barbara was the only one hurt, and not critically. The whole of base camp looked like a bomb had exploded. It wasn’t until we saw injured people walking and being carried towards IMG’s camp to get help that we realized the middle of base camp was totally wiped out.

All the Junkies joined to help the injured. Charmaine, a member from New Zealand, was a nurse and helped the most. We carried boxes of medical supplies and injured climbers to camps that were set up for triage and treatment. We were shocked to see so many injured and dead.

At the end of the day we returned to the Junkies’ camp and sat silently in the dining tent. There was blood on the table cloth, on Charmaine’s jacket and Lysle’s shirt. Nobody said a word; we were all shell-shocked. We knew the blood was not our own, but from the injured.

Base Camp after the earthquake

We stayed the following day, as there were still people who needed help, and we had to recover the bodies from the wreckage of camp. I went to help Phil dig up one of the dead. A tent had been thrown 200 meters over a cliff, and what we found is too horrible to describe. The body was all broken, so much was missing it was hard to believe only a day earlier he was alive, with hopes and dreams like me. Phil dug up something like 8 bodies and wrapped them. It was a frightening experience, and we were all in shock.

We couldn’t evacuate from camp, as were told the helicopters were for rescue only. The following days were calmer, but terrifying. I couldn’t sleep at all. I was hearing slides and avalanches all around the camp. I was afraid to sleep alone in my tent, and I moved in with Margaret. Every time we heard an avalanche coming, we sat up and held each other. We couldn’t breath. After a few days I thought I would have a heart attack. I talked to others, both members and Sherpas, and they all said the same. We were traumatised and living in fear. But we survived.

We didn’t know what was happening in the rest of Nepal. We heard conflicting stories, but we knew the climbing was over. It was a huge disaster.

Leaving Everest Base Camp with the injured

All members of my group were contacted by consulates or embassies from their respective countries, but I was disappointed that nothing came from Lithuania. I was so glad to get in touch with colleagues from the World Food Programme (WFP) who were in Nepal for the disaster response. Their support was invaluable, and I knew I was not alone.

We left base camp on Friday morning for the 4 hour walk to Pheriche. There we caught a helicopter to Lukla, but for Margaret there was one final twist. We took off into the air, and were high above the Imja Khola valley when suddenly the door flew open. Poor Margaret was sitting on the edge, with hundreds of metres of open space below her. She was terrified. We clung to her, somebody grabbed the handle, and the pilot made an emergency landing near Namche. Once again we felt glad to be alive. 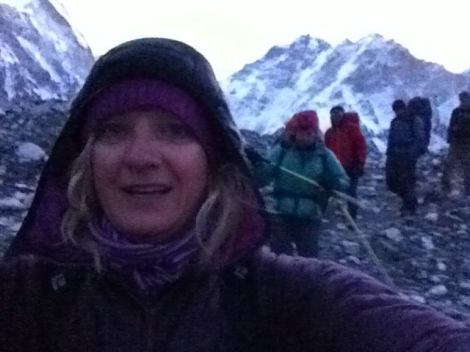 Me and the rest of the Junkies leaving EBC for Pheriche

In Lukla, the weather was turning bad and we thought we would be stuck there for a night, but we managed to get a fixed-wing flight to Biratnagar in the lowlands, beside the Indian border in the far southeast of Nepal. We shared a beer while we waited for our onward flight, and were back in Kathmandu that evening.

Again, I am thankful to my WFP colleagues for arranging a pick up and safe place to stay in Kathmandu. I will be joining the WFP response team in Nepal shortly. Thanks again for all your support. It’s been an expedition I will never forget.

11 responses to “The day Everest came tumbling down”